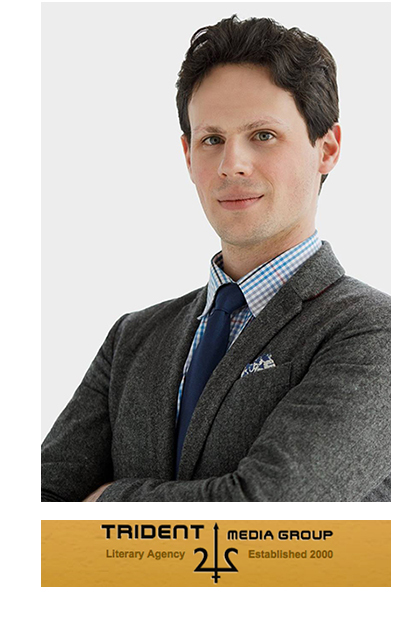 Are you a new writer with a killer book? Having a tough time nailing an agent? You’ll be interested in this.

He also champions riskier projects nobody else will handle and manages to find them advances with smaller houses. This is the guy to get on your side.

Mark is the #1 ranked agent for the last 12 months in Thrillers, Non-Fiction Humor and Children’s Fantasy. That’s according to Publishers Marketplace, the industry scorekeeper. So I wondered: How has he been able to do this? How has he succeeded with first-time authors when so many other agents have struggled and given up?

I spoke with Mark by phone recently and got some answers:

1. How long have you been an agent?

More than seven years. My family always expected that I’d work at Trident Media Group one day, since my father Robert is the founder and owner of the agency, so you could say I was sort of groomed for the position at a young age.

2. How many active clients do you have and how were you able to acquire them?

I have several dozen clients with new ones arriving regularly. I’ve been able to do this because new and aspiring authors tend to think of Trident Media first when approaching agencies. We’re #1 on Publishers Marketplace for Fiction and Nonfiction, in both the number of deals and dollars advanced.

I also seek out new authors on an ongoing basis, scouring the self-publishing bestsellers lists or tracking down projects that pique my interest on the internet, personal websites, and blogs.

3. What percentage of your authors are first-timers?

Most of my clients are debut authors. I’ve done 95 book deals to date, which averages out to one to two new book deals a month. I’ve been leading the agency in volume of deals.

4. What is the range of advances that you’re able to get for these debut authors?

From six-figure plus deals, all the way down to free royalty-based revenue-share deals. With some of the smaller independent publishers, the advances tend to be more anemic, like $20K or less.

5. How can you make any money on the low-ball advances? Most agents won’t bother with that level of sale.

Smaller literary agencies can’t usually afford to do low-advance book deals for lack of company resources and time, whereas Trident Media Group is a robust literary agency with many resources, which gives me the freedom to work on riskier projects.

6. What’s your take on the state of publishing, given that units, dollars, and net profits have been — despite valiant optimism — consistently declining.

I’m sure that many people coming of age in World War II thought that the world was coming to an end, and yet they found a way to go on. Similarly, book publishing has always been obsessed with predicting its own demise, yet we’re still here today. In my universe, new authors are still writing and readers are still eager to discover them.

7. Do you encourage authors to market their books, whether they ultimately have a traditional publisher or elect to self-publish?

Absolutely. Authors need to understand that they’re central to the marketing and sales of their book. Ultimately readers want to hear directly from the author. So I encourage clients to build author websites, blogs and to beef up their social media presence on sites such as Twitter, Facebook, Instagram, Goodreads, Reddit, do a three-minute video for YouTube, and even go on AMAs, those chat rooms where fans can write in with questions for their favorite authors. For example, here’s a link to an AMA by my debut author Deborah A. Wolf whose The Dragon’s Legacy I sold to Titan Books in London.

I also encourage writers to do readings at neighborhood bookshops, speak at writers groups and conferences, network at workshops, reach out to local publications and libraries, and appeal to established authors for advance praise.

Sometimes I’ll recommend hiring a book publicity firm for a couple of months to one of my authors before, during and right after publication, which can cost a few thousand dollars, but can definitely be worth it.

8. Can you tell us about some recent projects you’ve taken on?

I’m excited about having just sold a children’s fantasy book by two young artists Alejandra Green and Fanny Rodriguez titled Fantastic Tales of Nothing, to Ben Rosenthal at Katherine Tegen Books, a division of Harper Collins. The book went for six figures.

Also Gale Massey’s debut fiction The Elders Girl, to Chelsey Emmelhainz in her first acquisition for Crooked Lane, a small publisher that just started out in 2014.

9. What are some of your other titles we might have heard of?

My favorite tip for aspiring writers is the three peas in a pod:

Persistence: Don’t be discouraged by rejection, even if it happens many times over. It doesn’t mean that you’re not good enough—it means you’re not quite good enough yet. Learn from constructive criticism and grow.

Patience: This is a “hurry-up-and-wait business,” since reading and editing can take time. So it’s important to be willing to wait patiently for agents to decide whether to take you on and then wait some more once the work has been submitted to editors and publishers. There have been instances when I’ve sold a project in as little as four days. In other times, it has taken months.

Participation: Authors who want to write their manuscripts, and then just check out, rarely experience successful publication. Self-marketing is crucial for self-publishing. And if you go the traditional route, a great starting point is asking your agent and publisher how you can help leading up to publication and in the months thereafter.

It can be very hard to get an agent interested in your manuscript, especially if you’re a debut author. Have any experiences to share with fellow writers? Please post them here in comments.

Welcome readers.  Let me introduce myself and offer up some credentials for the opinions, perspectives and insights in this blog. In nearly … END_OF_DOCUMENT_TOKEN_TO_BE_REPLACED