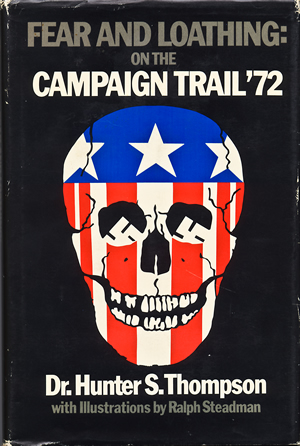 Shortly after we published Fear and Loathing in Las Vegas in Rolling Stone magazine, we commissioned Hunter to cover the 1972 presidential campaign for us in both a series of articles for Rolling Stone and in a full-scale book for our company Straight Arrow. Thus began my long and difficult relationship with the notorious Dr. Gonzo.

Hunter suffered famously from writer’s block, and had terrible obstacles that prevented him from turning out those pages. As his editor from 1973 to 1981, for Fear and Loathing on the Campaign Trail, The Great Shark Hunt, The Curse of Lono, and other projects, it became increasingly necessary for me to be in the room with the him, engaging in a 24-hour-a-day marathon of conversation, argument, and taped interviews, which were then transcribed verbatim, heavily edited by Hunter and myself, and finally woven into final draft.

Hunter needed the pressure but most of all seemed to appreciate the help in keeping him focused, stimulating his creative response, sustaining a coherent thread to the narrative, capturing and organizing the language, provoking, prodding, needling, moving, keeping pace with the alacrity of his mind, constructing the plot, laughing at the sheer poetry of his humor. During the days and nights we spent together in face-to-face sessions – at the Seal Rock Inn, the tower bridal suite at the Claremont Resort, and at Hunter’s Owl Farm in Woody Creek Colorado – we did what Hunter called “lashing those books together.”

“Very creative, Rinzler,” he said to me two years before he died. “You’re a credit to your race.”