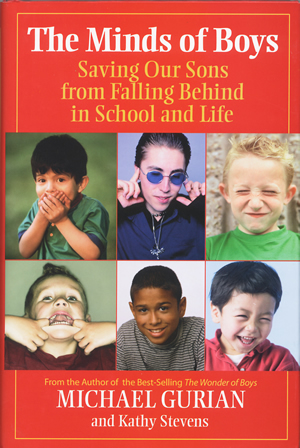 Michael and I began working together on The Prince and the King, about sons, fathers and male development, then went on to the landmark publication The Wonder of Boys, which sold hundreds of thousands of copies. The Wonder of Boys launched the boy’s movement, a nationwide discussion about the special problems boys have, problems somewhat different from girls’ issues. Over the years, I’ve worked on other successful books with Michael, including Boys and Girls Learn Differently, and the recently published Minds of Boys.

When we work together on a project, Michael and I begin on a conceptual level, then do a chapter outline, then go page-by-page with word changes, deletions and additions, moving around lines and paragraphs, and other specific hands-on developmental and line editing. It usually takes many months and several drafts until we’re both satisfied.

What I’m particularly pleased with about Michael’s books is their contribution to a greater understanding of children. These books have influenced schools and teachers to teach boys and girls differently. They taught hundreds of thousands of people about the unique hard-wiring, personality, temperament of individual children, and they’ve done it by making brain science so understandable, any parent or professional can better nourish the unique nature of the children in their care.