Chappaquiddick, MA ~ I’m writing today from this remote sandy outpost off Martha’s Vineyard, the most famous literary island in the US.

I can’t think of anything better than spending the day in a remote location. Sometimes, I even find that I can do some of my best work when I’m in a place that offers a sense of calmness and serenity. I can easily spend all day here, without feeling the need to move. All I need to do is bring some food and drinks in my cooling bag, and I’m ready to go. Cool beverages are a must when you’re spending the day in the sun, and if I get too hot and sweaty, then I won’t be able to concentrate on my work, and that won’t do anybody any good.

The Vineyard is one of those enchanted places in the world closely associated with writers and publishing. Think of Paris with Joyce, Fitzgerald, and Hemingway drinking absinthe at the Deux Magots. San Francisco has the legacy of City Lights Bookstore, Kerouac, Ginsburg, Ferlinghetti, and the beat generation. East Hampton has been for decades the place where you see editors and authors playing softball and making deals on the beach in August.

In Martha’s Vineyard, residents and summer visitors have been writing about the island’s history, culture, beautiful ponds and shoreline, incredible wildlife, and highly diverse residents for more than 200 years.

Do you like to poke around bookstores when you travel? So do I. I’ve been wandering through antique shows, garage sales, and book shops, discovering obscure out-of-print and self-published titles on the famous and infamous events and personalities of the island.

The bookstores around here are so old, and so are the bookshelves. Some of the shelves were made from rare oak wood, so they still look as good as new. This hardwood is also well known for its durability, thus, making it a suitable choice for woodworking projects like diner tables and backyard lounger. The other shelves, however, look like they have been repaired or replaced. The stores have different genres of books ranging from the classics, thrillers to romantic fictions.

The best book I came across about the true flavor and personality of the island was a two-volume oral history called Vineyard Voices: Words, Faces and Voices of Island People, a large beautifully produced set, which includes interviews and photographs of a broad variety of local denizens. I found both editions at an antique sale at the West Tisbury Grange for about $120 each, but you can find them for less online.

Many other titles are available, from mysteries to children’s books. One entertaining example for adults is Holly Nadler’s recent Vineyard Confidential, a compilation of Martha’s Vineyard gossip. For example, I read that Nathaniel Hawthorne, here during the summer of 1836 procuring horses for his uncle’s stage company, had a star-crossed love affair with a half-Indian young woman who bore his child and became his inspiration for Hester Prynne in The Scarlet Letter.

Other notable literary folks are celebrated in Nadler’s book, including Jackie Kennedy, who spent 16 summers here, during the period she was also working as an editor at Doubleday. Jackie met and signed up island resident Dorothy West, a writer who was a charter member of the black literary royalty of the Harlem Renaissance. 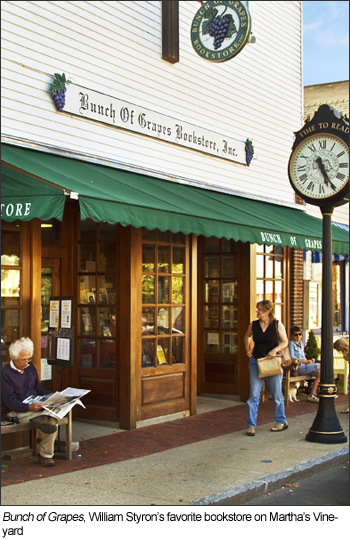 Dorothy West had summered at Oak Bluffs on the Vineyard since childhood in 1908, published a semi-autobiographical novel The Living is Easy in 1948 and wrote a column in the venerable local paper The Vineyard Gazette. Jackie O. loved the column and insisted that Ms. West let her publish a long languishing second novel, which was set in the Vineyard in the 1950’s. The Wedding was ultimately released in 1995 with the dedication “To the memory of my editor, Jacqueline Kennedy Onassis. Though there was never such a mismatched pair in appearance, we were perfect partners.”

Nadler skewers Lillian Hellman, author of the Broadway hit play The Little Foxes and the bestselling book Pentimento, who was known as “the meanest woman on Martha’s Vineyard” during the period she lived there with Dashiell Hammett (The Maltese Falcon and Red Harvest).

One of Hellman’s regular adversaries on the island was William Styron, author of Sophie’s Choice and Confessions of Nat Turner, and a Vineyard seasonal resident for fifty summers. Styron, who also wrote regularly for the Gazette, claimed at Hellman’s funeral that they fought all the time. Not about literature or politics, but whether a Smithfield ham should be served hot or cold.

Styron called the rambling Bunch of Grapes Bookstore in Vineyard Haven, “the best in the world.” The well-stocked general-interest bookstore also features a section devoted to books by local authors, from self-published cookbooks and bird guides to major histories, memoirs, novels, narrative non-fiction, and is the community center for new and veteran writers who are both year-around residents and summer visitors.

Beyond the scandal and celebrities on Martha’s Vineyard is a powerful respect and dedication to art and literature. You can sense it around you – writers writing. Back in the lush green forests. Along the trails, dunes, and marshes. This is a special place – hard to get to, isolated and magical. The perfect spot to ruminate and enjoy the solitude, read a dozen books or best yet, find your muse and write one yourself.

News update: A devastating fire on July 4th badly damaged the beloved Bunch of Grapes bookstore described in this post. The fire originated next door in a restaurant, Cafe Moxie, which burned to the ground. The townspeople had gathered for the traditional Independence Day street fair, with the Stars and Stripes draped from colossal flagpoles up and down the streets and celebrations all around. But they ended up watching on in disbelief as firefighters battled the flames. Fortunately no one was injured in the blaze, and the bookstore’s owner has vowed to rebuild.

Welcome readers.  Let me introduce myself and offer up some credentials for the opinions, perspectives and insights in this blog. In nearly … END_OF_DOCUMENT_TOKEN_TO_BE_REPLACED