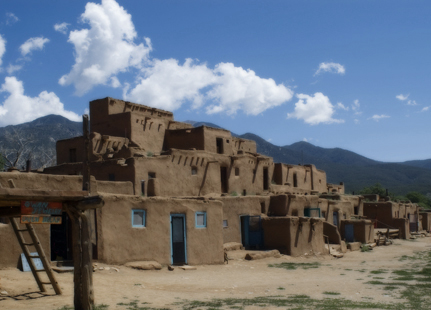 Taos, NM ~ This special place in the high desert has for generations drawn writers and artists, who come for the spiritual power of the endless skies, blazing sunlight, and thundering cloudscapes over the vast open plains and dark jagged mountains.

D.H. Lawrence and Willa Cather, playwright Thornton Wilder, poet Robinson Jeffers, painter Georgia O’Keefe, and photographer Ansel Adams are among those who arrived here at turning points in their careers and felt the Taos region exert a profound influence on their work.

The separate reality of Taos Pueblo

The undeniable pull of northern New Mexico as a literary destination is often attributed to the presence of the Taos Pueblo, an ancient village where the Red Willow Tribe has lived continuously for more than a thousand years. Members of the tribe who live at the pueblo today have no electricity and for water rely on the river that runs through it.

Taos Pueblo is a stunning sight. When you see the rich brown adobe dwellings stacked five stories high in sharp relief against the brilliant blue sky, you realize that you’re at the source of the famed southwest culture and architecture seen throughout the region and beyond. The thickened walls, organic, rounded edges and the vigas – heavy log rafters that hold up the roofs – are familiar and timeless.

You can feel how the enduring presence and integrity of these people has inspired writers and their readers to believe there’s a separate reality beneath their stoic and serene style of life, layers within layers of mystic truth and knowledge that only the Indians know – and they’re not telling.

Anyone on a literary quest to Taos soon learns about Mabel Dodge Luhan, a wealthy heiress from the East who arrived in 1917 with fistfuls of dollars and a burning desire to become the muse of the high desert.

Luhan tried to fulfill her fabulous visions by building a counterculture paradise that would offer a communal alternative to what she perceived as a failed materialistic Western culture. She married a local Pueblo Indian, Tony Luhan, and valiantly herded famous artistic cats to her home, with mixed results.

D.H. Lawrence, for example, accepted her invitation in 1922 to visit the place she described as “the dawn of the world” as he was coincidentally traveling the globe, looking for a site to establish his own utopian community. 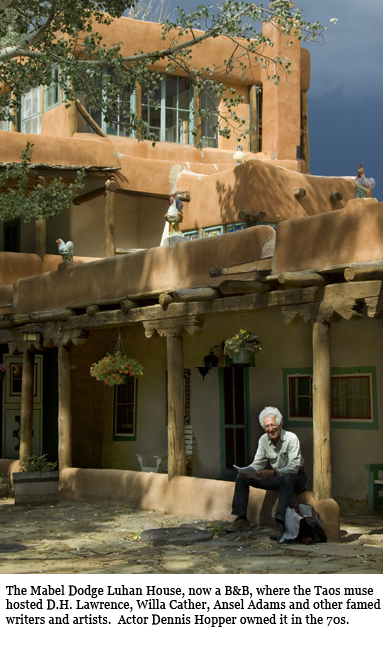 Lawrence agreed at first with Luhan’s claim that the indigenous culture of the American Southwest should “shift American consciousness towards organic expression.”

But after a few months, relationships turned sour, as Luhan pressured Lawrence to write the ultimate book about Taos that would revolutionize the world.

Instead, the cranky and mercurial Lawrence painted over the open glass windows of her second story bathroom with watercolors “perhaps to avoid having to see Luhan naked,” according to Lynn Cline in her book on the early Taos and Santa Fe writers’ colonies, Literary Pilgrims. You can still see his artwork decorating the windows in Luhan’s private quarters at what is now a B&B called the Mabel Dodge Luhan House.

You too can sleep here

We jumped at the opportunity to spend a weekend there in the Robinson Jeffers room with its traditional mud walls and high wooden ceiling built of log vigas. Through the windows one night we watched a spectacular midnight moonrise worthy of Ansel Adams’ famous 8×10 Land Camera.

On a stormy afternoon we curled up reading in the B&B’s atmospheric library filled with Luhan’s personal photographs and precious artifacts, basically unchanged since she presided over her literary salons of luminaries whose works became associated with the region. 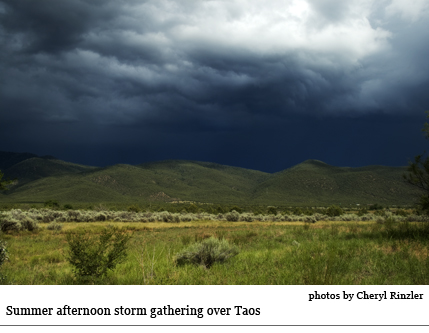 A writer under every stone

Writers and visual artists continue to come to Taos, drawn to the stark beauty and bold forces of nature here.

“The stars are different,” Georgia O’Keefe said. “The air is different here, the wind is different.”

Welcome readers.  Let me introduce myself and offer up some credentials for the opinions, perspectives and insights in this blog. In nearly … END_OF_DOCUMENT_TOKEN_TO_BE_REPLACED