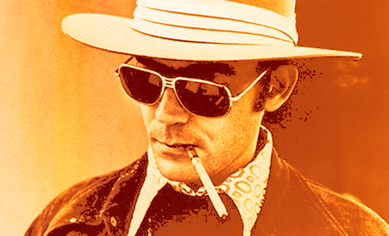 The deadline for Fear & Loathing on the Campaign Trail was nearly upon us and we had reserved press time at a cheap printer in Reno to rush out the book in time for Nixon’s second inauguration. (Look here for part one of this series.)

I was desperate and dauntless, with no manuscript in sight. So I showed up uninvited at the Seal Rock Inn, which overlooked the Pacific Ocean at the end of Geary Street in San Francisco. Armed with a case of ruby red grapefruit and ten bottles of Wild Turkey, I also lugged a monster reel-to-reel Nagra tape recorder with an 18-foot cord, and on a tight leash, my loyal dog Pushkin, a shaggy brown poorly trained standard poodle with a propensity for irrational exuberance.

I kicked Hunter’s door with my alligator cowboy boots until it opened a crack. I burst in to find Dr. Thompson in his familiar shorts, sunglasses, and long cigarette holder, stumbling over shattered pieces of furniture in a room that had evidently been the scene of a hurricane or wild encounter group, whichever came first, muttering and growling under his breath in a language I couldn’t yet understand.

We worked line-by-line until it was right

We plugged in the state-of-the-art Nagra recorder, with which he was very impressed, and sat down to talk. In contrast to the bullying tone of his letters, Hunter was gruff but gracious, at least tolerating my company. He poured himself a tumbler of Wild Turkey and began discussing how we could finish the book.

As a result of this surprisingly collaborative spirit, we wound up camped out together at the Seal Rock for the next four days. Without ever leaving the room, we talked, we yelled at each other, we rewrote the articles he’d written during the campaign, and nailed down the conclusion and climax of the book. We worked line-by-line, composing out loud, transcribing and polishing up all the new copy over and over until it was right. I asked him a lot of questions which he answered at length, and then we edited my questions out of the transcript.

Hunter paced up and down with the microphone, scouring and shuffling through the pages and galleys on the floor, the piles of photographs, the bottles and half-finished cartons of take-out. He was frequently upset with Pushkin for scattering his papers and leaving paw prints on the photographs. Hunter later described him in the book as “a huge paranoid poodle, totally out of control when the seals started barking outside, racing around the room howling and whining, leaping up on the bed.”

The deadline loomed large and there was no telling if we would make it or not.

Stay tuned for part three, in which disaster is averted but only temporarily.

You might also be interested in taking a look at How Hunter Thompson Beat Back His Writer’s Block.

Welcome readers.  Let me introduce myself and offer up some credentials for the opinions, perspectives and insights in this blog. In nearly … END_OF_DOCUMENT_TOKEN_TO_BE_REPLACED