Nothing in the publishing process seems to provoke more conflict than designing the book jacket.

Every editor, designer, sales person and publicist in the company can have a different point of view, often causing intense turf battles, expensive start-overs, blown production schedules, and snarky rants hurled between colleagues like:

“Sure, go ahead with that pretentious Picasso rip off, but my buyer at Barnes and Noble hates the blue period and will never order a book with that jacket.”

Or: “If we don’t use that retro Boy’s Life type design I showed you, we’ll sell 20,000 copies less and kiss our year-end bonuses goodbye.”

Or: “This book will sit on the shelves if we use that cheesy drawing of the two women kick-boxing on the cliff.”

Or: “We can’t afford an original piece of art for this mid-list book that’ll only sell 5,000 copies — if we’re lucky! We have to use one of those cheap stock illustrations.”

A jacket should truly represent the content, artistic intention, mood and style of the book. It should be beautiful and meaningful, but also have the punch, drama, and color to rivet any potential reader’s eye once they see it face-out on the shelf or table of some crowded book store.

Take a look at the covers pictured here. These are the current #1 best selling books in their respective categories on the New York Times list. What’s your opinion? Do you think any of these jackets helped the book’s success?

The lines of authority regarding directing and approving a book’s jacket tend to shift with the case-by-case politics of each situation. The numbers of participants with strident opinions in any given project, moreover, are proportionate to the size of the advance, projected sales, and budgeted net revenues.

The Editor…who acquires and develops the book from scratch, maybe even inventing the book, commissioning the idea with a chosen author. Either way, the editor is the original champion and producer whose job it is to shepherd the book through the production process while maintaining the book’s integrity, and at the same time satisfying the need to sell the book. That means playing ball with the requirements and opinions of the sales, publicity, and marketing people.

The Art Director…who’s responsible for interpreting the often inarticulate and muddy-headed ideas of the editor. For example, attempted dialogue between editor and art director can regress to something like this:

Art Director: “Who’s the book for?” Editor: “Well, uh, hmmm, well there are millions of people who will just love this story as much as I do!”

Usually overworked and underpaid, a good art director can be a brilliant creative partner, but unfortunately is often handling 40 other covers at once and they’re all due next Thursday.

The Author…who probably wants complete approval over the jacket — but only a tiny percentage have the leverage to get it. Most have to settle for some kind of guaranteed “consultation,” meaning only that they get to see a nearly final proof. Nevertheless, editors want their authors to be happy and will often listen seriously to their wishes. 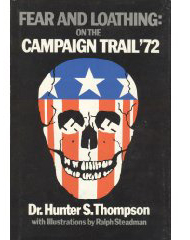 Hunter Thompson, for example, came in with a friend’s drawing of the leering skull we used so effectively for the original edition of Fear and Loathing on the Campaign Trail.

Many authors have excellent ideas for what their jacket should look like, and good taste too. So as their front-line champions, editors often struggle with their colleagues to keep the author’s best ideas in currency, despite opposition from all sides.

The Agent…who can be a powerful force in the process, especially if the literary rep is one with whom the editor may want to do a lot more business in the future. Agents may not necessarily agree with the author, in fact they often have their own idiosyncratic notions of what it the cover art should be. Editors ignore these wishes at their own peril, and often have to shuttle back and forth to caucus between superstar prima donna agents and recalcitrant sales reps.

The Sales Reps…those hard-nosed denizens of the real world, who are compelled to present 60 new titles in half an hour, and are most concerned with the idiosyncratic taste of key account category buyers, like the guy at Books-A-Million who doesn’t like Garamound or any other type over 16 points. Sales reps have a frightening amount of power since you literally can’t live without their support. I suppose, you can’t blame their rush to make money, considering there has had to be commission employee labor laws put in place to take care of their services and what these employees get from their job. That’s what I try to remember, anyway.

The Publicity People…whose interest may be to have the author on the front cover, if she’s famous or attractive. Or the opposite if not, and then not even on the flaps. Their clients are the national TV producers, bookers at National Public Radio, columnists for the New York Times and other media. These days they also want a jacket that will reproduce well on a screen for internet blogs and websites, where more and more books are publicized.

Five tips for what an author can do to help

With all these conflicting parties stirring the pot, the actual book jacket often suffers from the compromises of consensus. So if you’re an author trying to influence the jacket design for your book, here are five tips:

1. Try not to assume that you know what’s best for the book, even if it’s true. Cultivate good relations with everyone at the company and maintain a position of modesty, humility, and cooperation.

3. Muster empathy for the sales and publicity people who may seem to be marching to a different drummer but have mutual interests to share. Keep in mind that they have to sell your book, and without their enthusiastic efforts you’ll be severely handicapped.

4. Remember that in the end, this isn’t a science and we don’t always know what ultimately sells a book. Books with less than fabulous jacket designs have become huge sellers anyway. Take a book I published, the Scarlatti Inheritance by Robert Ludlum. I thought the cover was boring and that it didn’t say anything about the book itself. Nevertheless the historical thriller was such a hit that the design was used again for subsequent titles. See it here.

5. Once the jacket is designed and chosen, put aside any regrets and do everything you can to help sell the book, including your own strenuous on-line web marketing, blogging, twittering, and other brilliant new techniques that emerge in these rapidly changing times.

The Book Design Review blog has released a compelling list of favorite covers for 2008. Take a look and see what you think.

Welcome readers.  Let me introduce myself and offer up some credentials for the opinions, perspectives and insights in this blog. In nearly … END_OF_DOCUMENT_TOKEN_TO_BE_REPLACED