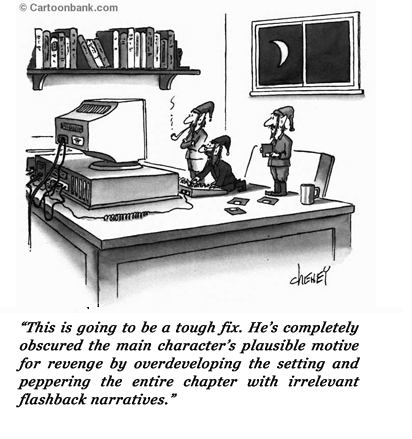 Q : I submitted my manuscript to an agent and she said the plot was confusing and needed a lot of work. I was crushed!  What should I do?

A : Telling a good story is the writer’s most important task. But constructing a great plot with so many ideas, characters and actions careening through your seething neo-cortex — and getting it all neat and organized on the page — isn’t easy. A reader can tell right away if it doesn’t work, especially that literary agent you’re hoping to impress.

Whether you’re writing a novel or a non-fiction book on 14th century agricultural techniques, you’re telling a story. It’s a narrative. The same rules apply. You need a great opening, a first, second, third act, and some kind of closure, denouement, maybe even an epiphany.  For more detail on this, take a look at an earlier post on constructing the narrative arc.

Many authors have problems plotting their stories. Here are some solutions for the most common issues:

1. First, you need an outline!

The most important first step for coherent plot building is to make a plan. Write a chapter-by-chapter outline. The finest writers I’ve worked with, literary artists on many levels, with the exception of the boy genius Tom “Tommy Rotten” Robbins, all have at least a rough private outline before they get started, so they know where they’re heading.

Don’t close your eyes and rely on the muse to whisper in your ear. That could be a mischievous imp with some very bad advice — unlike the hardworking elves in the cartoon above who obviously know their stuff.

As a discipline, start with fourteen chapters, three or four scenes per chapter. Use a personal shorthand to write out as much detail as you can, then study it carefully. Pretty soon, I’ll bet you’ll notice material that’s in the wrong place, can be compressed, or just has to be tossed.

Then move around the remaining pieces by cutting and pasting, or on index cards, or on a big erasable white storyboard like they use in the movie business. I’ve done it with writers using all of the above and it works, believe me, and it will save you a whole lot of time and trouble.

Some writers are afflicted with a compulsion to keep clearing their throat on the page. They have a hard time getting started. They don’t know where to begin or how to nail that fabulous first sentence. So they dither around, groping in the dark, all the while putting down words about this, that, nothing, usually digressive and meandering. Nothing said. Nothing happening.

Instead, start with something real that represents the essential theme and thrust of your narrative, a crucial moment in time, including one or two major characters in the story engaged in significant or symbolic actions. Like the faux ending of a relationship (to be remedied later, or not), or a crucial point in your political argument, history, or biography that cuts to the core of your idea or characterization.  For more on this, you might want to check an earlier post on the power of the opening sentence.

To get the juices flowing, browse through your own collection of books to find a good opening. Here’s one off my shelf, Sister of My Heart by Chitra Banerjee Divakaruni:

They say in the old tales that the first night after a child is born, the Bidhata Purush comes down to earth himself to decide what its fortune is to be. That is why they bathe babies in sandalwood water and wrap them in soft red malmal, color of luck. That is why they leave sweetmeats by the cradle. Silver-leafed sandesh, dark pantuas floating in golden syrup, julipis orange as the heart of a fire, glazed with honey-sugar. If the child is especially lucky, in the morning it will all be gone.

3. Careful with the flashbacks

The flashback can be a wonderful technique in telling a complicated story.  Recent literary successes such as The Brief Wondrous Life of Oscar Wao by Junot Díaz and Middlesex by Jeffrey Eugenides have made very effective use of shifts back and forth in time.

But I see many manuscripts that rely way too much on this literary device.  Most common is the big-bang school, an explosion of climactic action as the opening scene, then flashing back to the beginning of the story to explain how the characters got to that point.  This particular kind of flashback – slamming the story into reverse from point 9.5 to point 1.0 — has become so familiar it can seem canned and formulaic.

Another popular flashback device is to start at the beginning of something important, like a birth, or first meetings, or the launch of an idea or event, then flashing back to the historic antecedents or legacy that led to this scene. This is more like a 3.5 to 1.0.

In both cases, a very common and unfortunate technique is when the writer has a flashback within a flashback. That is, the story opens with characters in a climactic embrace or other significant end-game event, then the time shifts abruptly to an earlier time.

The poor reader tries desperately to get re-oriented when suddenly there’s another flashback to an even earlier climactic moment.  So the pattern becomes 9.5 to 4.5 to 3.7 and still not back to 1.0. It’s bewildering, and ultimately annoying. Prospective agents, editors, and publishers will put that down in a hurry.

4. Let your story tell itself

A common problem is the irresistible urge to explain what’s happening in the alleged story with a huge reservoir of meaningful and significant information that ranges over paragraphs, pages, or even an entire chapter, usually at the opening, but often at other inconvenient spots in the book. The point of this information dump, the writer thinks, is to keep the reader alert regarding background, progress, prognosis. It’s a form of omniscient voiceover that has no place whatsoever anywhere in the book and should be banished, exiled, and forbidden to appear. Please!

Another aspect of this issue is the familiar mantra for writers everywhere: Show, Don’t Tell. Many clichés are true and this one of my favorites. There’s nothing more tedious than the intrusion of the omniscient narrator giving us a filtered summary of a scene instead of letting the characters speak in quoted dialogue, including sounds, smells, visual details, and all the other dramatic accessories of a real-life event.

5. Create characters we care about

Reading a book involves an altered interior universe we carry with us throughout the day.  So we the readers need to engage with your characters, especially the leading protagonist. We have to care about what happens to them, one way or another. It’s better yet if we can identify with or be inspired by their quest, their transformation from beginning to end.

In a misguided attempt to create anti-heroes or realistic villains, many writers alienate or fail to attract readers with their completely unappealing characters, people you don’t want to know or care about. Villains need to be interesting.

For example, Satan is definitely Milton’s most interesting character in Paradise Lost. He has passion, he bleeds and rages and plots against God, whom he also loves, whose approval and re-acceptance he yearns for. Yes, he may represent an ultimate evil to some, but he’s also a nuanced, very believable human representation.

So remember that your central characters need to go through changes, develop, improve maybe or at least be fully realized as three-dimensional personalities who receive their just deserts.

“One must not put a loaded rifle on the stage if no one is thinking of firing it,” Anton Chekhov famously wrote in 1889.  That maxim, known as Chekhov’s Gun can be applied to every character and event in your story. If you introduce a person at the beginning of your story they had better have some relevance to what happens after that.  And if you invent a dramatic incident, it needs to lead to something else and not stop dead in its tracks, never to be remembered, like some kind of coincidental disaster.

This is the kind of issue you can resolve in an outline, as recommended above. Watch out for anyone or anything that doesn’t reappear at some point in a significant way.

Not necessarily to other people, at first, but alone, as if you were explaining something important to a loved one or friend. See if you want to hurry past some parts. That’s a bad sign. Or if you remember something important that should be added at precisely one spot that you somehow forgot to mention.

Remember it all started sitting around the fire in some cave millions of years ago. Humans have an inexorable compulsion to tell stories, to make meaning of their lives, to select the most important moments, events, words said by others, and use it to build connections, influence, explain, or inspire. It’s in our genes.

Welcome readers.  Let me introduce myself and offer up some credentials for the opinions, perspectives and insights in this blog. In nearly … END_OF_DOCUMENT_TOKEN_TO_BE_REPLACED