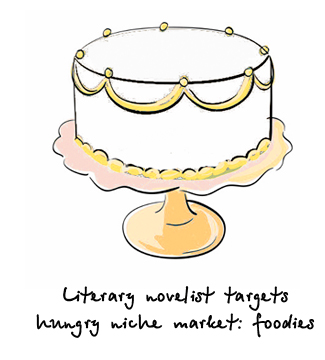 What does a recipe for white cake have to do with selling a literary novel?

A lot, as it turns out, in the case of The School of Essential Ingredients, the acclaimed debut novel by Erica Bauermeister, described in reviews as a seductively delicious tale of love, loss, and redemption.

“I decided to target foodies and cooking students by offering recipes created by my fictional characters, which I gave away in guest posts on blogs and at readings in culinary schools,” Bauermeister told me in a phone interview from her home in Seattle.

Her guest post titled Carl’s White Cake, appeared on the blog Bookingmama, and included enticing backstory details alongside the cake recipe. It can still be viewed on Bauermeister’s own site.

“When I started niche marketing this way, my novel shot up the Indie Bestseller List and stayed there for six months. But it fell off the list when I stopped to work on my new book.” Scroll down for more examples of niche marketing for books.

“Niche marketing is identifying and reaching out directly to groups of potential readers, says Sandi Mendelson, of the literary public relations firm Hilsinger-Mendelson which orchestrates campaigns for blockbuster authors Larry King, Tina Brown and many others. “It’s relationship building – and requires a personal commitment to an ongoing give-and-take conversation with your readers, using venues like blogs, vlogs, and newsletters as well as Skyping with book groups, specialized book tours, and readings.”

Taking it a step further, Bauermeister says “It’s about finding an angle in your book — an element of the plot or characters — that could appeal to a whole new audience of readers who might never have heard of your book or thought about picking it up.

“It means really knowing your market and offering them a tangible take-away, or surprising, original special information they can use in their daily lives.”

Niche marketing works in every genre, fiction and non-fiction. Smart authors these days realize that this targeted approach to selling books is a highly effective use of their time and energy. They can even prove these marketing techniques are working if they’ve read this guide on measuring their success. You can read more about niche marketing below.

The Art of Racing in the Rain by Garth Stein (Harper Books)
Target niche: NASCAR enthusiasts

This New York Times bestseller is told from the point of view of Enzo the dog, who observes the life of his master Denny, a race car driver. There’s a lot about race track culture and what it takes to be a champion, so Stein targets racing enthusiasts with special readings and promotional materials at NASCAR events and local fan meetings.

Shadow of the Swords: An Epic Novel of the Crusades and Mother of the Believers: A Novel of the Birth of Islam by Kamran Pasha (both published by Simon & Schuster)
Target niche: Muslim and Jewish community groups

These two historical novels, written from an Islamic point of view, are finding a market among Muslim and Jewish audiences. Pasha is intimately familiar with both groups, as he was born in Pakistan but raised from the age of three in a mostly orthodox Jewish neighborhood in Brooklyn, New York. Community groups like the Progressive Jewish Alliance, the Muslim Public Affairs Council and others arrange for him to read at events like a recent fundraiser for the Islamic Domestic Harmony Foundation for abused women.

“I know I’m reaching people because I get both fan letters and hate mail. Muslims either love the book or think I’m a traitor to my religion,” Pasha said. “Non-Muslims are either fascinated by hearing another perspective on history and religion — or they accuse me of being part of a terrorist plot to take over America.”

With this fourth book in the series, could the Young Adult Twilight Saga juggernaut find an even bigger audience? Adrienne Biggs, a book publicist based in San Francisco, thinks so. “Beyond the principal market of teen girls, smart marketing should include targeting diverse niche readers like teen goths, fans of historical fiction, readers of thrillers, romances, and pop culture,” Biggs said. “Plus, if they’re clever, they could also target moms of teen girls, teachers, and teen boys — all niche groups with connections to the main market.”

Lumby on the Air by Gail Fraser (Penguin)
Target niche: Lovers of Americana

This is the fifth novel in a series featuring the old-fashioned country town of Lumby populated by “relentlessly quirky residents who remind us just how crazy normal life usually is.”

Fraser interacts with readers on her extensive website’s blog and chat room. She writes that readers make some great suggestions. “I jokingly posed the idea of buying an 18th century grindstone to which I could put my nose when a deadline approached. Within hours, I had received a dozen emails from fans who had tracked down various grindstones for sale. The following weekend, we were hauling a stone back from Manchester, Vermont.”

Blurring the lines between fiction and real life, Fraser has created something of a tourist destination out of her own homestead, “Lazy Goose Farm” in upstate New York, where by arrangement, fans can visit the gardens, red barns and organic farming that inspire the fictional town of Lumby. Online, reader fans can immerse themselves in Lazy Goose Farm and Lumby lore, and shop for branded merchandise, from coffee mugs and aprons, to paintings of Lumby created by Fraser’s artist husband Art Poulin.

This debut mystery, first of a series by Harris called The Dirty Business Mysteries, features a gardening sleuth. Harris targets garden lovers by giving away seed packets printed with the book’s cover at readings she gives at flower shows and garden clubs. Readers send her snapshots of the flowers they’ve grown from those seeds.

This groundbreaking book about girls and bullying in school was used as the basis for the hit movie Mean Girls. Wiseman is also the author of a recent Young Adult novel Boys, Girls, & Other Hazardous Materials (Penguin.)

Wiseman targets teens facing serious issues via “Rosalind’s Inbox” on her website, where she responds to questions in a video (vlog) format. With her high visibility in the tween market, she also created her Girl World Book Tour targeting mothers and daughters, packed with interactive features, Q&A sessions and book signings.

Is This Thing On? by Abby Stokes (Workman Publishing)
Target niche: computer illiterates

With the subtitle A Computer Handbook for Technophobes, Late Bloomers, and the Kicking and Screaming, Stokes discovered an unexpectedly large and receptive market among older folks who’d never touched a computer before. She calls them “silver surfers,” and discovered they’re well organized and eager for help.

Stokes targets these “digital immigrants” at conferences like the 10,000-member Southwest Computer User Group in San Diego. On the other side of the country, the Florida Association of Computer User Groups invited her on their cruise to Cozumel, and plans a direct-mail campaign to its 20,000 members with a special offer for her book. Every time Stokes makes one of these appearances there are new bulk sales and big spikes on Amazon.

• Be creative. (You’re an artist, right?) Think how to convert the book of your heart to a “product” of special value to your potential readers.

• “Never say no!” (in the words of Abby Stokes.) Get out there and boogie. Send that postcard. Return that phone call. Resist the desire to be alone all day. Don’t be shy, no one can sell your book as well as you can.

• Be willing to phone-in or visit readers groups and book clubs who have an special interest in some aspect or angle of your book. Check out this central resource for book groups across the country.

• Sign up for Google Alerts, so when a website, blog, reading club newsletter or posting mentions your name, you’ll be notified by email. Keep track of how often you’re mentioned on these sites and offer to do guest posts, send free books to members, and give away information, tips, tidbits that relate to the topic of shared interest.

• If you have access to business resources, try using zoho mailchimp integration to make the newsletter process easier. It will let you manage your subscriber information directly so you know who is interested and who is opting out, which can help mitigate sending that letter out to someone who unsubscribed.

• If your book holds interest for a professional or academic audience, go to conferences and meetings, ask to make a presentation or present a paper. Sell your book at the event. Get the mailing list of the organization for postcards or email mailings. If they have a newsletter of their own (and many do) take an ad and send in a free article highlighting ideas from your book.

Have you identified your niche markets?

And once you’ve got some ideas about groups of potential readers, how will they find you and your book?

This approach takes creativity, perseverance, passion, and that very important personal touch, so authors who take this on with enthusiasm and energy will be the most effective. Each writer I interviewed for this post was deeply dedicated, feeling an enormous stake in the outcome. These missions are personal and that makes all the difference. One more time: No one can sell your book as well as you can.

Would be very interested to hear about your experience tackling your own niche markets, what worked, what didn’t, what you’ll try next!

Welcome readers.  Let me introduce myself and offer up some credentials for the opinions, perspectives and insights in this blog. In nearly … END_OF_DOCUMENT_TOKEN_TO_BE_REPLACED