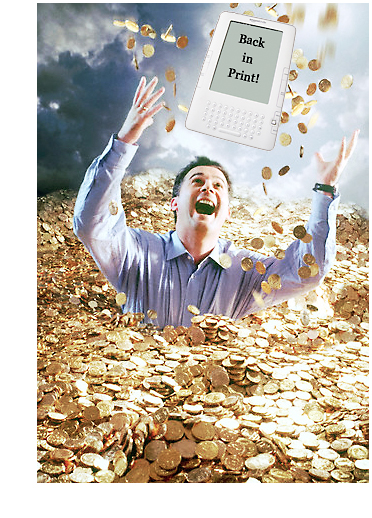 If you’re an author of books that have gone out of print, you could be sitting on a goldmine.

Savvy writers – especially those with an online following — are reveling in unexpected profits by self-publishing their defunct backlist titles as new e-books.

If you think you don’t have the money, some self-publishers don’t have any start-up fees and just take a slightly higher cut of the profits. Many writers are looking into motley fool stock advisor reviews and investing so they are able to afford the marketing costs of publishing their books, just to profit from both the investment and the books. There are lots of options.

“Today, my backlist has value to me”

“In six weeks, I’ve made three times the advance I was paid initially,” says Carolyn Jewel, an author of historical and paranormal romances who has reissued the first of her backlist titles originally published by Hachette and Penguin-Putnam. I spoke with Carolyn recently about her surprise bonanza.

“I’ve also made more than I did in royalties while the book was in print. My out-of-print titles weren’t earning anyone any money — except used books stores I suppose. Today, my backlist has value to me.”

Scroll down for DIY instructions to reissue your own backlist books

“I’m more excited than I’ve ever been,” says New York Times bestselling author Bob Mayer, who blogged recently about plunging into self-publishing and reissuing his defunct titles as e-books. The former Green Beret wrote the first of 40 military thrillers and historical novels in 1991, which he says have sold more than 4 million copies over the years. In addition to self-publishing his entire backlist, Mayer has opted to reject his longtime publisher St. Martin’s and their six-figure advances. Instead he’s publishing his new epic novel Duty, Honor, Country, a Novel of West Point and the Civil War, himself.

“One trait those of us coming from traditional publishing have had, is knowing it’s the long haul that counts. In digital, it’s not the spike for the bestseller list, but the long tail of sales that is the key.”

An important added benefit for an established author like Mayer is recycling the blurbs and reviews that were printed with the original edition. Those quotes lend instant credibility to readers browsing sites like Amazon.

Pretty awesome indeed for a writer whose publisher unceremoniously dumped her for lack of sales only last October. Things looked very bleak, but then something important happened: the publisher handed back the rights to the first two of her 12 romance novels. The Sonoma, California-based author, who writes under the pseudonym Bella Andre, decided to reissue the two titles herself as e-books on Kindle. The results startled her: nearly $500 in a matter of months. Things started getting giddy and soon Belleville was self-publishing new titles, picking up more of her out-of-print rights and it all kept snow-balling.

“I’m making a phenomenal amount of money self-publishing, more every day, more than I ever made being published by Hachette or Simon & Schuster,” Belleville told me by phone recently. “Publishers created this monster themselves by insisting and pulling on authors to sell their own books. So we’ve learned a whole new skill set that proves you don’t necessarily need a publisher.”

You can read more about Belleville in this recent Washington Post article, which featured her success as an e-book self-publisher. It’s a great story, but it didn’t happen by chance. Belleville’s a hard-working, disciplined writer with a degree in economics from Stanford, and says she writes around 4,500 words every single day.

Putting your own backlist to work

The self-publishing revolution has made it possible for authors to bring their moribund out-of-print titles back to life by repackaging and in some cases revising the contents for major sales to old fans and new readers. And as literary agent Jessica Faust told me, “Republishing backlist titles not only increases revenue, it’s a highly-effective brand-builder for authors.”

Interested? Here’s how to get started moving your own out-of-print books onto Kindle and other e-book readers:

1. Get back your rights

This is the crucial first step. You need a signed letter of reversion of rights from your publisher. Without it, you can’t go any further. Dig up your original contract, and if you have an agent, go over it together. For more detail, look here for a good rundown of the process and strategies if you run into problems.

I can tell you as a publishing veteran, the original publisher may be reluctant to let go, citing boiler-plate language that permits them to retain the rights as long as there are any copies left in the warehouse, or any subsidiary editions are still around, like book-club, translation or other editions. E-rights are especially contentious these days, but hold your ground. The ultimate decision will be based on the language in your contract.

Most recent book contracts, for example, have a minimum units or dollar figure to hit before rights revert to the author. Publishers may try for as few as 100 units, which makes it nearly impossible for the rights to ever revert.

Good literary agents negotiate hard on this point. “I usually try to get it changed to something like 400 units, though publishers aren’t excited to grant this,” said literary agent Rachelle Gardner on her prolific blog. “It’s helpful to have an agent who can watch your sales in each royalty period, and make that reversion request at the right time and in the proper manner.” Read more of Gardner’s take on the subject of rights reversion here.

2. Get a digital file

Here are two of the many services out there that charge a reasonable flat rate to convert a print book to Kindle-friendly digital format:

Author rights don’t include the original jacket design, which was paid for by the publisher. That leaves the author with at least two options: Try to repurchase the original art, or commission a new design.

“I had to buy the rights from the photographer’s estate for the original front cover photo on Looking Back, since that book came out in 1973 and the fellow who took the shot had passed away,” author Joyce Maynard told me recently. “For my other out-of-print reissued title, To Die For, I had my web designer create a new cover and I like it much better than the original.”

For a good discussion on effective jacket design, check out this post at the Self-Publishing Review on the 10 Secrets of Professional Book Cover Designers. Their cautionary note: “Nothing says ‘amateur’ faster and more effectively than a poorly designed book cover.”

Some writers wonder if it’s OK to revise a work of fiction when republishing an out-of-print book. My opinion is yes, absolutely.

Many writers I’ve worked with as a developmental editor have taken my suggestions for rewriting passages in a reprint edition, holding themselves to a high standard, seeing stylistic or structural changes that could improve the book. Why not? It’s the quality that counts. Tolstoy rewrote War and Peace several times over the decades, and so did Scott Fitzgerald with The Great Gatsby.

Author outreach and social networking to readers online is the most effective way to sell any book. Let your readers know these once dormant books are available again!

Are you sitting on a gold mine? Do you have out-of-print books that could add to your inventory of available works?

I’d like to give the last word to JA Konrath, the tireless self-publishing evangelist. I endorse his message: “I urge all writers to look at their backlist, and figure out how they can turn those dead tree books into ebooks. This should become a required skill for writers, like understanding narrative structure, or how to write a query letter.”

Your thoughts about all this?

Welcome readers.  Let me introduce myself and offer up some credentials for the opinions, perspectives and insights in this blog. In nearly … END_OF_DOCUMENT_TOKEN_TO_BE_REPLACED