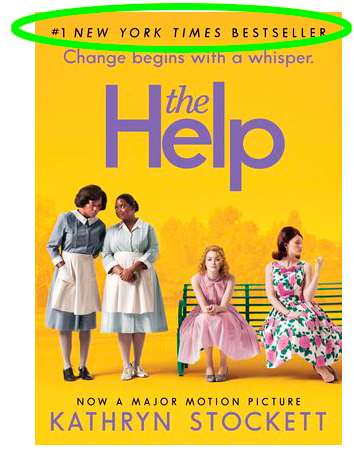 The gold standard for success as an author is to make the New York Times Best Seller list. That’s the big brand banner that publishers, authors and readers want to see on the front cover.

It shouts “Read Me! I’m certified!”

How does an author accomplish this feat? What does it take for a book to become a bestseller?  Some of the answers are right there in the list. So let’s drill down and and see what can we uncover about writing, getting published and appealing to readers.

♦ What’s the single most important thing an author can do to get on the list? Scroll down for the answer from a writer whose book has been on the coveted list for 117 weeks.

The New York Times now publishes 23 separate bestseller lists. The lists range from Combined Print & E-Book Fiction and Non-Fiction, to Hardcover, Advice, Political, Business,and Children’s books. They include everything from literary novels to thrillers, memoirs, romances, mysteries, sci-fi paranormal books, YA and middle-grade, self-help and how-to, religious, inspirational books, and many others.

Don’t worry about following any so-called trends. There’s tremendous variety and no dominant category of successful books. Put away the notion that if you’re story doesn’t have a vampire or get-rich quick scheme, it’s going to die on the vine. Trying to anticipate what category of book will be selling by the time your book is written or published is a waste of time.

In my work as a developmental editor, authors ask me frequently “How long should my book be?” or “I’ve heard no book can be over 300 pages.” My response has always been that a book should be as long as it needs to be and no longer.

What the New York Times lists reveal is a broad range of lengths in both fiction and nonfiction. Kathryn Stockett’s best selling novel The Help is a heavyweight at 544 pages, while Blind Faith by CJ Lyons is 392. On the nonfiction side, Heaven is for Real by Todd Bupo is only 192 pages, but Unbroken by Laura Hillenbrand is 496.

Don’t pad or cut to fit any arbitrary length for your book. If you have nothing else to say – stop. If there’s more essential story or information – keep going. I always do recommend, however, that a book should include nothing that will be never missed, so avoid any self-indulgent tangents or digressions.

3. E-books are the future

Earlier this year, the New York Times began running four new bestseller lists that include e-book sales, and it’s about time. The Association of American Publishers (AAP) and the Book Industry Study Group of Bookstats show unit sales growth of e-books increased a whopping 1039.6% between 2008 and 2010, with 114 million units sold last year. This number only includes those reported by traditional publishers, not all e-books sold by self-publishing authors, so the actual numbers are even greater.

The old days when hardcover was king are over. You can sell large quantities of your book in a virtual e-book format that’s either self-published or traditionally published. Authors can pick their own formats and channels.

Here’s an astonishing fact: Three books on the top ten titles on the Combined Print and E-Book Fiction Best Seller List are self-published: #4 Blind Faith by CJ Lyons, #5 The Mill River Recluse by Darcie Chan, and #6 The Abbey by Chris Culver. Wow. The speed with which self-published books have risen in acceptance and success is something traditional publishers never anticipated.

The lower cost of e-books have made waiting for mass-market reprints of higher-priced hardcover or trade paperbacks increasingly obsolete. AAP and Book Study Group reports show that mass-market paperbacks are down 13.8% during same period.“The people who used to wait to buy the mass-market paperback because of the price aren’t going to wait anymore,” says Liate Stehlik, publisher of Morrow and Avon at HarperCollins.

Think about self-publishing as an honorable and attractive option to the frustration of trying to find a literary agent and traditional publisher. Self-publishing is increasing exponentially. It’s not easier. You still have to write a good book and sell it largely on your own. But it’s faster, you have more control over it, and you get a bigger share of the profits.

5. Film and TV tie-ins are changing

The #1 hardcover fiction on NY Times Combined Print & E-Book Fiction list is The Help by Kathryn Stockett, the 544-page blockbuster novel about African-American maids working in white households in Jackson, Mississippi during the early 1960s. Originally published in 2009 it has spent 107 weeks on the Hardcover Fiction bestseller list. The film based on the book was released in August of 2011 with what these days is a modest budget of only $25 million. It’s a big hit, grossing more than $123 million to date in the US alone.

Think film, and not only if you’re writing a conventional thriller, mystery or romance. Don’t assume your book has no chance of becoming a major motion picture.

No one can sell your book as well as you can, whether you already have a big platform or not. Publishers have finally realized that readers want to have direct contact with authors, not with publishers. They don’t really care who published the book but look for reading advice from book bloggers, online reviewers, websites, blogs, tweets and Facebook posts from people they know and trust.

What’s the single most important thing a writer can do to make it to the list?

For an answer, we turn to Garth Stein, whose novel Racing in the Rain has been on the New York Time Trade Paperback Fiction list for 117 weeks, this week at #8.

“Well, not to sound simplistic or anything, but the single most important thing has to be having a good book, doesn’t it?  I mean, I’ve heard there are clever ways to spend a lot of money to get on the list, and once on the list, there’s a little bit of self-sustaining momentum.  But that doesn’t last unless it’s a good book and people want to read it and they buy extra copies for their friends and family and so forth.

I’m all about marketing and social networking and rah, rah, rah!  And it takes a lot of work from a lot of different people, like the publisher, sales force, booksellers, and the author to land on a (or “The”) list.

But if the emperor has no clothes, the readers will see it right away. So write a brilliant book first.”

Thanks Garth.  Easy to say, right?

Do you monitor the bestseller lists?  Or do you avoid them entirely?  I’m interested in your own observations and insights as writers, which I hope you’ll share here in comments.

Welcome readers.  Let me introduce myself and offer up some credentials for the opinions, perspectives and insights in this blog. In nearly … END_OF_DOCUMENT_TOKEN_TO_BE_REPLACED