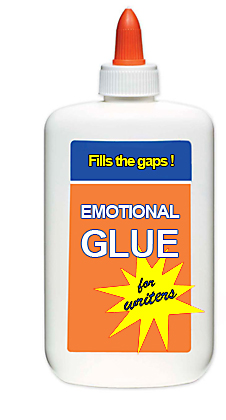 Q. An agent said my novel is missing emotional glue. Like it doesn’t stick together. What is emotional glue and how do I get it into my story?

A. Emotional glue reveals a character’s internal reactions, ruminations, and anticipated responses to the dialogue and action of the story. It’s the unspoken ideas and feelings that focus and hold together the narrative and keep the reader right there with you, caring and excited about what’s gradually evolving.

Adding this sticky stuff fuses the narrative with the core combustive material that drives the book forward. It creates a pervasive climate, helps the reader feel the mood that hangs in the air, and compels us to keep turning the pages.

In a widely-reviewed first novel, The Evolution of Bruno Littlemore by Benjamin Hale, the emotional glue is supplied through the first person narrator, a chimpanzee. We see everything through Bruno’s eyes as he tells us his story as a baby primate from a local zoo nurtured by a university primatologist named Lydia Littlemore. This kind and patient woman teaches him to speak, and brings him into her home, where she encourages him to paint collectible abstract canvases, and dress like a man. Eventually Bruno evolves to a point of intelligent sophistication, while at the same time falling in love with his benefactor.

We readers enjoy a built-in subtext to the narrative, since at first Bruno can hear and see everything but not speak. Only we know his true thoughts about these mysterious human creatures and their often-humorous attempts to coerce him into what they think is more civilized behavior. And when he does learn to speak and interact as a strange but respected creature, we are privy to the internal conflicts he experiences between his inherent animal bestiality and his new access to polite society. Eventually Bruno’s love for Lydia and horror about the cruel experiments on his little sister create violent and calamitous results, but profound meaning for what in fact it means to be human.

How a developmental editor can help

As a developmental editor working with authors on early drafts, I frequently go back to find and help fill in the spaces, so the reader can understand a character’s private process that leads to new behavior.

I worked recently, for example, on a memoir by a writer who grew up in an enmeshed relationship with his beautiful, narcissistic mother. With no other men on the scene, she recruits him in an unscrupulous series of fraudulent swindles that lead to her arrest and lengthy imprisonment. The author’s core motive for writing the book was to show how despite this dysfunctional childhood and adolescence, he’d grown up to enjoy a healthy productive life.

The first draft of this work-in-progress was packed with glib dialogue and fast-moving high jinks, but there was no way the reader could take the author seriously or care about what happened to him. So our job was to create a sense of his transformative journey, his survival over amazing and uniquely bizarre obstacles from dysfunctional struggle to high functioning happiness.

We went through the book and inserted his internal feelings and responses to the dialogue and action around him. At first, for example, he’s delighted by his mother’s shenanigans, the sudden flights from house to house and across the country, the mad schemes and unpredictable windfalls of luxurious gifts. Then we gradually increased his unspoken concerns about getting a formal education and having stable friendships. His reactions become incrementally different, more aware, sophisticated, able to understand how he’s a separate person, different from his mom.

By the end of the book, the author is more confident, able to appreciate his intelligence and ability build a separate life, with long-term relationships and meaningful work, leaving the reader uplifted with the prospect of more good things to come for this young man.

How to inject emotional glue into your story

Stay focused on why you’re writing this story and what’s it actually about – the theme, message, vision of it. What happens at the end and what’s the point? Hold that motive in your mind from the first sentence, and shape all of the internal spaces, reactions and responses so they’re consistent with that ultimate goal.

Focus on the narrative voice

It’s always the narrative voice that conveys the internal response, the feeling and attitude that holds the story together and moves it on page by page. This is true whether you’re writing in first person, as in the mother-son memoir described above, or the opening of Scott Fitzgerald’s The Great Gatsby “…frequently I have feigned sleep, preoccupation, or hostile levity when I realized by some unmistakable sign that an intimate revelation was quivering on the horizon.”; or in third person, as in the exquisitely revealing first sentence of Virginia Woolf’s novel “Mrs. Dalloway said she would buy the flowers herself.”

Give us the occasional clue, the unspoken detail that reflects what just happened or effects the character’s future actions. Describe the emotional event that can’t be seen or heard. But don’t explain or interpret.  Don’t tell the reader what you want them to feel, or try to control what the story means to them.

Inject these moments of emotional glue from the beginning of the story, infrequently at first, with just a bit more as the book progresses. There’s no formula or rule about this but rather a need for good literary craft. Don’t let the new material stand out, slow the pace or become repetitious. Think of it as part of a seamless story-telling voice, either the character’s or your own.

Does your story have enough emotional glue to keep a reader affixed to the page?

Sometimes a writer doesn’t discover there’s a problem until an agent or other professional reader takes a look.  It’s better of course, if you can resolve these issues before sending out your book!  I’ll watch here in comments for any questions that come up.

Welcome readers.  Let me introduce myself and offer up some credentials for the opinions, perspectives and insights in this blog. In nearly … END_OF_DOCUMENT_TOKEN_TO_BE_REPLACED