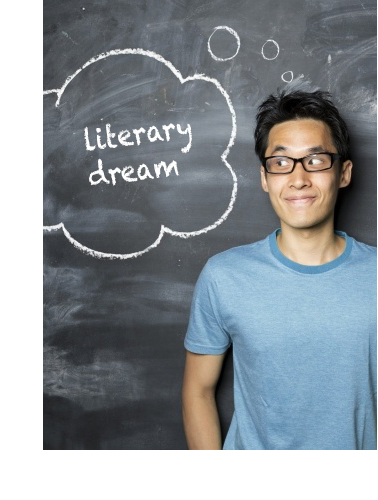 A few aspiring authors get to stay home and write all day. Think of them as the 1%.

The rest need to worry about putting food on the table before they can focus on their literary dreams.

They need to work a day job in order to pay bills. Or find the best stocks to buy in order to raise enough funds to publish their work. Or put their literary dreams on hold for a while because they just can’t afford them.

Even the most successful writers I’ve edited, past and present, took whatever work they could find along the way. I’ve even known a few writers to gamble for their fortune and reinvest their winnings into their writing. In recent years, websites like this have become incredibly popular, not just with authors, but with many people, so it’s really no surprise that authors used them to earn a little extra cash. Heck, I would too if I were any good at poker! However, the only thing I can gamble on is the roulette table.

Claude Brown was a mailman in 1964 when I discovered his monumental manuscript for Manchild in the Promised Land overflowing a sagging cardboard box under my desk at Macmillan where I had just landed a job as a junior editor.

Claude introduced me to his friend Toni Morrison, a young textbook editor who took her two adorable toddler sons around to commercial modeling gigs for the extra income she needed as a single mom. Not long after I signed up her first book The Bluest Eye, she was able to give up the day jobs and went on in her career to write Sula, Song of Solomon, Beloved , and win the Nobel Prize for literature.

Joyce Maynard told me recently that she started writing for money when she was just a teenager. “I wrote copy for a mail order catalogue that sold nude women golf tees and toilet paper with a joke on every square.” Joyce later wrote To Die For, which was made into a film starring Nicole Kidman, the controversial memoir At Home in the World, and the recent bestselling novel Labor Day, which was also filmed, starring Kate Winslet and Josh Brolin.

These now-famous authors had to figure out how to survive financially before they earned enough from their writing alone. For example, it’s more than likely some authors have looked at something similar to this stash review or the likes in order to start investing and trading to stay financially afloat before their book takes off. These days I continue to work with new writers who are facing the same problems. They’re each finding a way to do it, based on their specific stage of life, domestic and professional situation, or support system. Here are some inspiring examples and some of the choices they’ve made.

Wait until it’s safe or take the plunge?

Neville Frankel, author of the historical novel Bloodlines advises young writers to take the plunge. “It’s important that every young person who dreams of being a writer take a leap of faith and go for it. Real writers write because they can’t not write, because they have a story to tell. Live in the attic or the basement; do whatever jobs you need to make ends meet. If you’re fortunate enough to have a partner or spouse with a job, make a deal to support each other financially.” Nowadays with the increasing number of financing options available out there, like bridging loans, personal loans, and the like, it could be more possible for young writers to write without having to worry much about financing like the writers of old.

Kira Holt, whose action adventure novel Rapid Descent – Nightmare in the Grand Canyon just came out, said she started writing when she was 10 years old, typing on her mother’s old Underwood. “But I stopped writing at 12 because of critical comments that undermined my self-confidence. Turning 40 and realizing half my life could be over, lying awake at night while thinking about writing, and feeling victim to a demanding professional career, I decided I had to finally do what I wanted, what I needed…to dive in whole-heartedly. Now I’m 53, have completed three books, and writing the fourth.

“My advice for new writers,” she adds, “is to find your confidence and your voice will find you. Find supportive people and continue learning. Be kind to everyone, even kindly say ‘no’ when they ask for your time. Writing isn’t magic. It can be passion, but it requires work and dedication.”

Working as a commercial writer

Amy Tan is a great example. When I met her back in the early 1970s, she was making a very good living working crazy hours as a tech writer for early start-ups in Silicon Valley and the San Francisco Bay Area. That kind of discipline and focus surely helped later when she began writing (and reportedly rewriting up to 20 times) the short stories that evolved into her first novel, the bestselling The Joy Luck Club, first published in 1989, and later blockbuster books, including The Kitchen God’s Wife and The Bonesetter’s Daughter.

Jillian Thomadsen, author of the financial thriller Infiltrate, worked for ten years on Wall Street, while also raising a family. “Being a Mom has made for an extremely difficult balancing act. This advice has been given so many times before, but it bears repeating. Do as much as possible – write as much as you can, climb as high as you can go, career-wise – before you have kids. You are infinitely more productive and focused than you will be after having kids. I sometimes wonder what would have happened if I had become a waitress or bartender back in 1999 and given myself the time to write. Where would I be now? However, being a Mom has also made me more perceptive, more experienced, and more compassionate. And while that may have hindered me as an employee, it has definitely helped me become a better writer.”

Novelist and short story writer David Tomlinson and his wife Lisa got married a year out of college and quickly had two children. While working as a door-to-door political fundraiser, Starbucks barista, and Kenpo karate instructor, David dreamed of writing a novel some day but had no time, especially when Lisa went to Medical School and he found himself taking on more and more parenting tasks. Now, eighteen years later, David and Lisa have achieved a balance of responsibility, and his debut literary thriller American Prayer was just taken on by a major NYC literary agent.

“I dove headfirst into the writing thing and am just starting up my second novel. The truth is, though, that without the emotional and financial support of my family, I wouldn’t be inspired to write word one.”

Time out for a MFA?

“It used to be that people went to Paris, or to New York. Now they go to MFA programs,” says Cathy Day in Scratch. Cathy is the author of two books: Comeback Season and The Circus in Winter and teaches creative writing at Ball State University.

But she also acknowledges how hard it is to stay in that artistic bubble: “Our students live in this world, and they have debt, so many of them do not want to live outside the economy. The economy is pressing down on them, and we MFA teachers have to recognize that. One of the things I want to start doing is encouraging them to take minors in things like telecommunications, digital publishing, and entrepreneurship.”

Does your day job leave time for writing? How do you make it all work? We’d love to hear about your own literary dream. We welcome your comments, stories and advice.

Welcome readers.  Let me introduce myself and offer up some credentials for the opinions, perspectives and insights in this blog. In nearly … END_OF_DOCUMENT_TOKEN_TO_BE_REPLACED