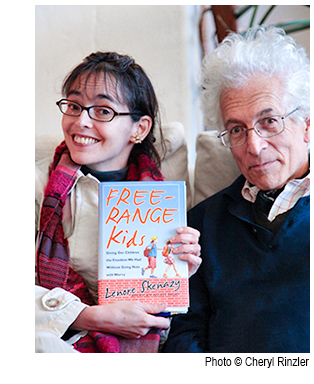 Just ask my author Lenore Skenazy, whose debut book Free-Range Kids – How to Raise Safe, Self-Reliant Children (Without Going Nuts with Worry) led to her own reality TV show, among many other surprises. If you would like your children to learn then they can watch videos on Youtube such as the boo boo song which is great for them to to engage in learning and music whilst having fun!

We had a lot of fun working on the book together, but I’ll let Lenore tell the story:

Here’s my advice to all aspiring writers…

Let your 9-year-old ride the subway alone. You won’t BELIEVE what happens next…much of it thanks to a certain storied editor.

But let me back up.

If you have heard of me, it’s because I did indeed let my 9-year-old ride the subway alone. Then, being a newspaper gal, I wrote a column about it. Two days later I was on The Today Show, MSNBC, Fox News and (for contrast) NPR, defending myself as NOT “America’s Worst Mom.” But Google that phrase and you’ll find me there for 77 pages.

Now you can also find me on TV. I’ve got a new reality show, World’s Worst Mom, on Discovery Life. And I’ve joined a think tank, and I’m interviewed in the press several times a week — I’ve done Anderson Cooper’s show three times. And I travel around the country — sometimes world — to give talks. Perhaps you caught my keynote the Bulgarian Happiness Festival? (For real.)

But the coolest part of all of this is that the debate I sparked — How come we don’t trust our kids in the world anymore? — has gone completely viral. The topic is coming up in kitchens, on playgrounds, and in the halls of government. But none of this came about just because I wrote that one article. To sidestep for one moment, a lot of the time, whether you are a working mom or a stay at home mom who is finding ways to motivate your life daily through Stay at home mom quotes or through family support, you can always be targeted for your choices, and it can be a difficult road to go down, especially if you are doing it alone. Anyway, as I was saying, this did not come about because of one article.

It came about because after the media decided to pounce on my parenting — parent-judging being our national pastime — I started the blog Free-Range Kids, from which grew my desire to write a book, from which grew a shaggy dog of a book proposal.

When my agent shopped it around to publishers, it was Alan Rinzler who jumped on it.

THAT turned out to be my biggest break of all.

Because I had not just one idea — I had about 2,379. I was on fire with theories about how parents had become so paranoid, and the role of the media, and aren’t kids sort of being treated like 1950s housewives? Or pets? And what’s with our fear of chemicals? And by the way, I have no problem with bottle feeding, and, and, and…

And Alan saw the big picture. From this jumble of notions and observations, Alan determined I had something cohesive: The “10 Commandments” of Free-Ranging.

That one, single organizing principle changed everything. Suddenly, I was not just a columnist with a bunch of sort-of-related topics. I was an expert! I issued commandments!

Alan proceeded to help me see which ideas could be melded into a single chapter, and which ones simply had to go. But he wasn’t ruthless. When I couldn’t get it down to less than 14 big subjects, he didn’t flinch. He said, “Go for it.” That’s why my book has, oddly enough, the FOURTEEN Commandments of Free-Range Parenting.

What I mean is: He let me keep all my ideas, and my voice. For instance, since I like saying “since,” rather than “as,” that’s the word you’ll see in my book. My book sounds like me — and yet, weirdly, it was Alan who helped me fine-tune it. Like (I also like “like”), in one chapter, sorry — in one commandment — when I was trying to illustrate how independent and resourceful kids can be when we let them, I told the story of a young girl in Poland who saved her mom from getting raped during the Holocaust.

“What?” I protested. “It’s the perfect story of a kid doing so much more than we’d ever think possible!”

But the tone was off, Alan insisted. Here we had a book taking a kind of funny yet factual look at how we got to “helicopter parenting,” and suddenly there’s a Nazi raping a mom. Go find another example, he commanded.

And I did. I found a diary entry from an Italian orphan at the turn of the century talking about how he escaped from a pick-pocketing gang in Rome, got himself to a fishing village, saved up enough for passage to America, started out here by shining shoes, and ended up owning several shoeshine stands. It was still an amazing story, but it wasn’t depressing.

I’ve got Alan to thank for that — and for another key feature in my book. Amidst all the studies and stories I was presenting, how about throwing in some actual parenting tips, he suggested: Baby steps, medium steps and giant leaps?

Those tips have proven some of the most popular elements of the book.

So what is the key to igniting national interest in your book, and how can you keep it going? Here are a few things I learned:

1 – Don’t just write, DO SOMETHING. When I look back at over a decade’s worth of my columns, there’s only one that sparked national interest, even though the topic — childhood independence — is one I write about a lot. What was different about the “subway column” is that it wasn’t just an opinion piece, it was my real life. Theory put into practice. I’m not positive how that works for fiction writing, but the key seems to be: You should believe so deeply in what you’re writing about that you are willing to “live” it.

2 – Get thee to social media. Everyone starts out with one follower on Twitter. But what may look daunting and boring — connecting with tons of other people you’ve never met — turns out to be so fascinating and fun, soon you may waste all your writing time just retweeting cool stuff you find. This is something Alan had to goad me to do: Blog more! Learn how to tweet! I felt I didn’t have much to say online, at first. Now it’s my favorite medium.

3 – Figure out how to get Alan on your side. We all need some guidance, even if we look like we are “self made.” My book and life both improved — vastly! — when I met him.

Meanwhile the presses keep rolling for Lenore. The New Yorker Magazine featured her in a column a few issues ago, writing that she had launched “a movement” and quoted from Lenore’s website Free-Range Kids: “Fighting the belief that our children are in constant danger from creeps, kidnapping, germs, grades, flashes, frustration, failure, baby snatchers, bug bullies, men, sleepover and/or the perils of a non-organic grape.”

Can’t buy that kind of publicity.

Has writing your book brought some surprising results? Please share your experience here in comments.

Welcome readers.  Let me introduce myself and offer up some credentials for the opinions, perspectives and insights in this blog. In nearly … END_OF_DOCUMENT_TOKEN_TO_BE_REPLACED