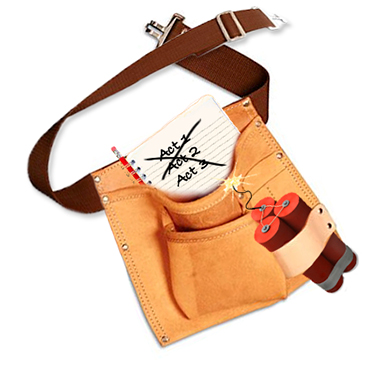 Feeling boxed in by the rules and expectations of the conventional narrative arc? Tired of the old 1st act, 2nd act, 3rd act routine? Itching to break out and try something new?

Ordinarily, I’m a staunch believer in the basics of linear story structure: keep it simple, show don’t tell, and leave the audience happy.

You can read more about my advice on constructing and strengthening the traditional narrative arc in this earlier post.

One of the most important things a writer might want is ideas and inspiration. If you want to try different ways other than conventional methods, the first one could be the use of other artists’ works as a tool to open your mind. You can listen to some music, place some canvas on your walls (if interested, you can have a look at uk canvas wall art prints), and watch plays. Along with that, let’s also consider some more methods to break out of the box and take some risks that just might distinguish your book from other more formulaic efforts.

1. Make a list of what you have so far, including events in the underlying story, important facts, ideas, context, and potential characters.

2. Now cut it in half. Leave out anything that is repetitious, digressive, ultimately irrelevant and does not contribute to the basic vision, mission, and motivation for writing the book in the first place.

3. Translate ideas into actions. Every critical juncture, turning point, a new idea or development needs to be transformed into a scene with characters, movement, vigorous pace, quoted dialogue and visual description. This is equally true whether for a non-fiction book, a coming of age memoir, or an ambitiously literary young adult vampire novel.

4. Start anywhere. Not necessarily at the beginning. Not at the end. Not even at the most logical turning point or critical juncture. It’s like being a stunt man, diving into the window of a moving car. Free yourself, follow your instincts, toss everything at the proverbial wall and see what sticks.

5. Don’t explain. This means don’t write a prologue or jump to explanatory flashbacks. Be playful, mischievous, counter to all expectations.

6. Add stitches when necessary. Feather in a few words between scenes with a very delicate touch and without an obvious transition. This requires surgical precision and the fewest words possible. For example, without going back in time, try inserting dialogue where one character questions or comments on another in quotes that reveal the background and context of their relationship. Or, with a first person narrator, set up recollections triggered by something happening or being said.

When the going gets weird the weird turn pro

That legendary anthem from the late Hunter Thompson is especially true when constructing an unconventional narrative arc. Remain coherent at all times. Resist any temptation to be unorthodox or scattershot just for the sake of being different or cool or gonzo.

Is it working? Are you making sense? Or possibly leaving your reader bewildered and confused? You may have lost your objectivity and might not be the best judge.

This kind of rule breaking may benefit from the help of a developmental editor who won’t try to homogenize the structure back to standard norms.

Look for an experienced hand who appreciates what you’re trying to do and can delete, add, shuffle and shift so the story holds together but still has the flavor and style you started with. Here’s some advice on finding your own developmental editor.

There are many examples of writers and artists who broke all the rules and made it work. Here are just a few.

These classics of modern American literature were all bestsellers, with nary a conventional structure in the lot:

1. Catch 22 by Joseph Heller. Acknowledged as one of the greatest American novels of all time, this World War II narrative is emphatically non-chronological and told from several different character’s POV, circling back so alternate perspectives and interpretations are juxtaposed and the ultimate time line emerges only gradually as you keep reading, unable to put it down.

2. Middlesex by Jeffrey Eugenides, has an exceptionally complex and widely praised structure and huge historical canvas. The author shifts from an unreliable first person narrator who presents key elements of the story in a manner that is retold with contradictions by an omniscient third-person voice. It begins with a historical epic of Greece, digresses to an essay in a medical journal of a “recessive mutation that polluted” the family’s genetic pool and eventually caused the narrator to be born a hermaphrodite. The story shifts continuously back and forth in time from the secret incest of the grandparents generation to the present life of the narrator in Berlin.

4. Freedom by Jonathan Franzen, with its highly unpredictable narrative structure that’s full of twists, turns, reversals, and surprises. The story begins with what appears to be an omniscent third person but is gradually revealed as the heroine’s first person narrative of her story to an investigative psychiatrist. Later, much of what she says is retold and contradicted from several other characters’ point of view, as in Eugenides, but in this case from reliable members of her family. Franzen has written that one of his rules of writing is “Fiction that isn’t an author’s personal adventure into the frightening or the unknown isn’t worth writing for anything but money.”

Get reacquainted with the work of painter Jackson Pollock. Remember how he splattered wild colors all over huge canvases? When you stepped back, it made sense.

Also watch a few films like Ground Hog Day, which starts over from the very beginning several times until ultimately reaching a satisfying emotional climax, or Eternal Sunshine of the Spotless Mind and Momento – both films which present fast-moving elements of a story with reversals, leaps ahead, and other deliberate confusion that dramatizes the protagonists’ loss of memory.

Get lost in the Rites of Spring by Igor Stravinsky. Talk about wild and crazy stuff that breaks all the rules!

Breaking rules can be liberating!

When this approach succeeds, it can be very liberating. And even if it creaks and groans and doesn’t completely gel, step back and reconsider your original ideas for the book and see if any of the techniques you’ve tried with your rule-breaking draft can be retained for another pass through. Perhaps that odd leap in organization can provide a wonderfully unexpected wrinkle in the next and more conventional structure.

What about your narrative arc?

Does the arc in your story need some shaking up? Or is the conventional approach working just fine, thank you very much?

If you’ve tried something different, what kind of feedback are you getting?

Welcome readers.  Let me introduce myself and offer up some credentials for the opinions, perspectives and insights in this blog. In nearly … END_OF_DOCUMENT_TOKEN_TO_BE_REPLACED