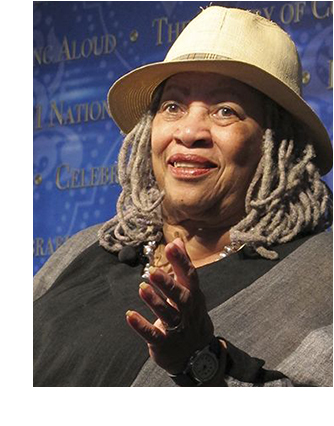 When Toni Morrison talks about writing, I listen.

I’ve taken a keen interest in what she’s had to say ever since I began working with her in 1968, when I acquired, edited, and published her first novel The Bluest Eye. More on what it was like working with Toni here.

The Bluest Eye was a break-out critical success, highly praised in the New York Times, sold millions and established Toni as an important new author. She went on to win the Pulitzer Prize for fiction for Beloved and published many other notable books including Sula and Song of Solomon, Tar Baby, Jazz, and others. She won the Nobel Prize for Literature in 1993, and the Presidential Medal of Honor in 2012.

So, when Toni was interviewed recently in the National Endowment for the Arts Magazine about the craft of writing, I read every word. Here are some of the valuable nuggets of advice she offers writers, each followed by a few notes from my own perspective as a developmental editor.

TM Writing for me is thinking, and it’s also a way to position myself in the world, particularly when I don’t like what’s going on. I wrote the The Bluest Eye because I wanted to read it. I thought that kind of book, with that subject – those most vulnerable, most undescribed, not taken seriously little black girls – had never existed seriously in literature. No one had ever written about them except as props.

Since I couldn’t find a book that did that, I thought, “Well, I’ll write and then I’ll read it.” It was really the reading impulse that got me into the writing thing.

AR Having an authentic passion for what you write is essential. Writing just to make money, follow a trend, or emulate a genre you don’t really love – bad idea. Won’t work.

TM I used to get up before sunrise. I’m very, very smart in the morning, and everything is clear. By noon it’s over. Then as the day wore on, I got dumber and dumber. That used to be my habit.

I thought I did it because I had small children and I wanted to write before they got up. But then when they grew, I was still doing it and still preferring it. Not anymore because I’m too old. I’m 83, so some of those habits have changed.

AR Toni was always writing, avoiding distractions, focused on getting something done every day. Writing is often an obsession, a compulsive habit that can’t be denied. This means self-discipline and regularity are essential, regardless of what else might be going on in your life or how the writing itself feels to you. Remember that rewriting is the next step. Look here for more on the habits of successful writers.

TM Some writers whom I admire say everything. I have been more impressed with myself when I can say more with less instead of overdoing it, and making sure the reader knows every little detail. I’d like to rely more heavily on the reader’s own emotions and intelligence.

It’s like writing sex scenes. You know the type of scenes that I’m on about. The ones where you would incorporate some sort of sex toys that you know are a must have for any woman who wants to experience an orgasm, with or without a man. Yes. It’s those types of sex scenes that I’m talking about, so you really have to think hard about how to start writing such scripts. I’m not suggesting you go out and spend money on things like a fucking machine that you never intend to use for yourself, but taking the time to do a bit of research can really make a difference to these scenes being believable or not on paper.

What you do in such a scene is open it up so that the metaphorical language can stimulate it, so that it’s not clinical, it’s not surgical. You want people to imagine it as well as they can. You want it to be like they are using a SLS Dating Site in front of them. Being able to imagine it as best they can be very important when it comes to the success of your book. There is a reason that the erotic scenes you see on websites such as tubev.sex are such a success and you need to tap into this when writing. Then the reader can fill it out take it in or remember it. But the rest of [getting any scene right] is just keep doing it. You just do it again and again.

AR Writing too much, explaining, adding intrusive commentary or more detail than needed – all problems I see every day as an editor. Less is better.

Don’t write about what you know!

TM When I taught creative writing at Princeton, my students had been told all of their lives to write what they knew. I always began the course by saying, “Don’t pay any attention to that.” First, because you don’t know anything and second, because I don’t want to hear about your true love and your mama and your papa and your friends.

Think of somebody you don’t know. What about a Mexican waitress in the Rio Grande who can barely speak English? Or what about a Grande Madame in Paris? Things way outside their camp. Imagine it, create it. Don’t record and editorialize on some event that you’ve already lived through.

I was always amazed at how effective that was. They were always out of the box when they were given license to imagine something wholly outside their existence. I thought it was a good training for them. Even if they ended up just writing an autobiography, at least they could relate to themselves as strangers.

AR Thanks, Toni, for busting that cliché. If you can stretch, create something unfamiliar to you personally, draw on what’s happening around you instead of what’s rattling around your head…Yes, do that!

TM Pay very close attention to failure, rather than get depressed or unnerved or feel ashamed. As a writer, a failure is just information. It’s something that I’ve done wrong in writing, is inaccurate or unclear.

I recognize failure, which is important; some people don’t – and fix it, because it is data, it is information, knowledge of what does not work. That’s why writers need rewriting and editing. It’s as though you’re in a laboratory and you’re working on an experiment with chemicals or with rats, and it doesn’t work. It doesn’t mix. You don’t throw up your hands and run out of the lab. What you do is you identify the procedure and what went wrong and then correct it. If you think of writing simply as information, you can get closer to success.

With writing, you can always write and erase and do it over.

AR Yes you can, but you also need an editor, and I’m sure Toni would agree.

Does Toni’s advice resonate with you? How do you handle problems in your writing? Share your thoughts with other writers here in comments, and I’ll watch for any questions.

Welcome readers.  Let me introduce myself and offer up some credentials for the opinions, perspectives and insights in this blog. In nearly … END_OF_DOCUMENT_TOKEN_TO_BE_REPLACED